What are Glaciers and Why Do They Matter?

There are over 100,000 glaciers in Alaska, predominantly in the Southeast, Southcentral, and Central regions, spanning approximately 75,000 square kilometers of the state. Of these glaciers, only about 600 are named, and even fewer are studied in extensive detail. Because the majority of the glaciers in Alaska lie in remote and difficult to access regions, most information obtained about them is in the form of satellite remote-sensed data. Thus, fieldwork and observations make important contributions to our understanding of glacier processes for the ability to verify scientific data on the ground. Numerous glacial research projects are currently underway in Alaska, focusing on topics ranging from crevasse formation to glacial flow rates, paleoclimatology (the study of past climates), and glacial retreat/growth. Across the board, scientists are interested in the fine mechanics of ice movement and glacial response to climate change so as to understand how glaciers impact the global economy, community, and environment.

But what is a glacier? And what makes them so important to the climate? This article will explore the basics of glaciology, climate science, and Alaskan geography in order to provide more information about the mechanics of these flowing masses of ice seen across the state of Alaska, and throughout the frozen regions of the world, known as the cryosphere.

Glacial Mechanics – How do they work?

To begin, a glacier can be thought of as a large river of ice moving slowly downhill under the force of gravity. Throughout the world, glaciers come in two main categories: polar and temperate. Polar glaciers are characterized by sub-freezing temperatures that allow the ice to remain frozen to its underlying bedrock, whereas temperate glaciers remain at or above freezing (0˚C) throughout their profiles. Ice that remains at 0˚C is quite warm and remains at its pressure-melting point, resulting in quicker movement across landscapes due to the introduction of meltwater at the base of the glacier-bedrock interface. Therefore, the main difference between these types of glaciers is the speed at which they flow and erode the bedrock upon which they reside. Because temperate glaciers often have meltwater present at their base, they can slide along the bedrock through a process called basal sliding, as well as within the ice column through internal deformation. Internal deformation is responsible for the majority of polar glacial flow, hence their slower rates. The other main difference is where these glaciers are found geographically. Typically, temperate glaciers reside in more moderate polar and circumpolar climates, such as in coastal Alaska, New Zealand, and continental Europe, to name a few. Polar glaciers, on the other hand, are commonly found in Antarctica and Greenland, where the temperatures often remain below freezing.

Beyond temperate and polar classifications, glaciers come in many different shapes and sizes. A detailed description of the different types of glaciers can be found here. Most common in Alaska are cirque, valley, tidewater, mountain, piedmont, and hanging glaciers. Of the many glaciers in the Valdez area, Alaska Guide Company offers tours to the Worthington and Valdez Glacier, both temperate cirque and valley glaciers, respectively. The Columbia and Shoup tidewater glaciers are accessible by sea kayak and water taxi, and connect to the broader Chugach Mountain Range. Over the past few years, all of the glaciers in the Valdez region have receded considerably, and will continue to do so. Check out a visual timeline of the Valdez Glacier here. 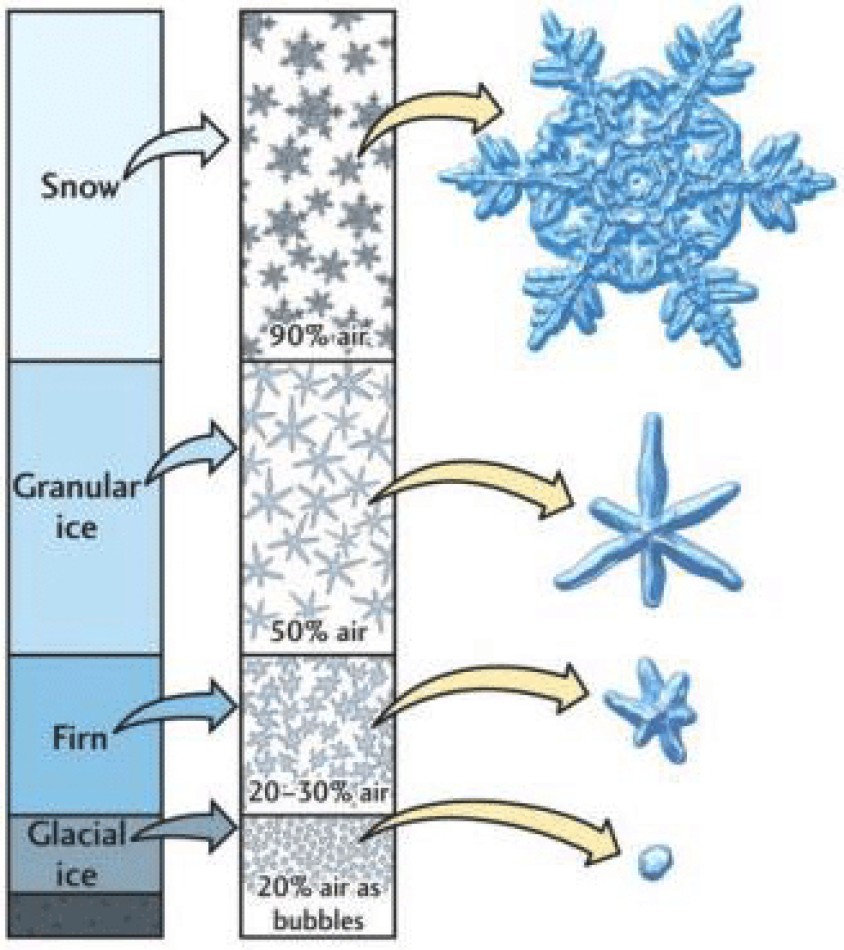 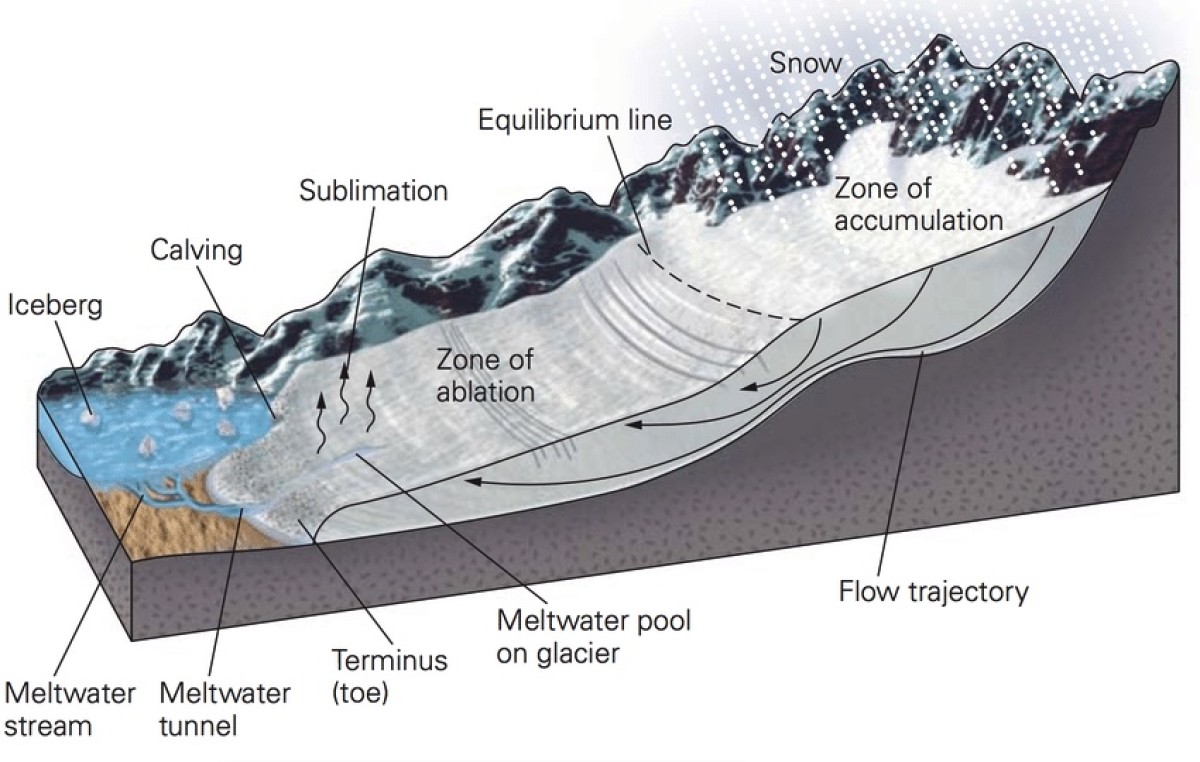 Before discussing glacial recession, it is important to understand how they form and shape landscapes. Glaciers form as snow accumulates and compresses into many layers of ice through a process called snow metamorphism (Figure 1), which requires time and pressure. A glacier can be divided into its accumulation and ablation areas, delineated by the equilibrium line (Figure 2). In the accumulation area, snow falls and builds on top of the glacier ice, and is usually the region of higher elevation on a glacier. As the glacier flows downhill, it reaches a point where it is no longer accumulating snow and instead is losing snow and ice mass. This is where calving and large crevasses occur, and is characterized by large swaths of blue ice. In essence, the accumulation area feeds the glacier, while the ablation area depletes it.

The simplest answer is directly linked to atmospheric greenhouse gases, namely carbon dioxide and methane. The greenhouse effect has been largely studied and refers to the way atmospheric gases blanket the planet and trap heat on the Earth’s surface. Though greenhouse gases are essential for maintaining a livable climate, their concentrations in the atmosphere are exceeding any previously measured levels and are now driving the observed rise in global temperatures. Spikes in past carbon dioxide atmospheric concentration, obtained from marine sediment and ice cores, were linked with significantly higher global sea levels and temperatures than today, shedding light on the planet’s current trajectory. It is this temperature increase that is contributing most to glacial instability and dramatic retreat. Boiled down, glaciers are retreating because they’re losing more ice than they’re gaining as a result of higher air temperatures.

Role of Glaciers in the Climate

Now, why does this matter? Sure glaciers are retreating, and global temperatures are rising, but what are the implications of this? To answer this, think of the Earth’s climate as a constantly fluctuating balance beam of warm and cold temperatures, or high and low energy systems. Across the globe, from the molecular to the whole earth system level, energy flows from high to low areas, as does temperature. Heat from the equator travels north and south, towards the poles. In the process, ocean currents, wind patterns, weather systems, and various microclimates are created. Thus, the poles are vital components of this balance beam. This energy balance is disrupted as glaciers and ice sheets melt, because the temperature gradient has been shifted, leading to abnormal climate patterns and devastating natural disasters (think wildfires, 500-year floods, hurricanes, etc…).

The climate’s natural variability is not the only thing interrupted by glacial melt. Glaciers are important sources of fresh water throughout the world, and their melt contributes tremendously to sea-level rise. Today’s observed sea-level rise, estimated at an average rate of 1.8 ± 0.5mm/ year, is mainly due to a combination of glacial melt and thermal expansion (the expansion of water molecules as they heat up). Recent research has revealed that the glaciers in Alaska are retreating at some of the quickest rates globally, and will be significant contributors to sea-level rise in the near future. Understanding what happens in Alaska thus has global implications, especially for the estimated 267 million people worldwide who are threatened by imminent sea-level rise because they live below two meters of the current mean sea level. It is effectively impossible to study glaciers, especially those in Alaska, without studying climate change and sea-level rise. Losing ice means losing global climate consistency, which is why studying ice can quantify with more certainty the extent of climate change and its impact on temperate glaciers.